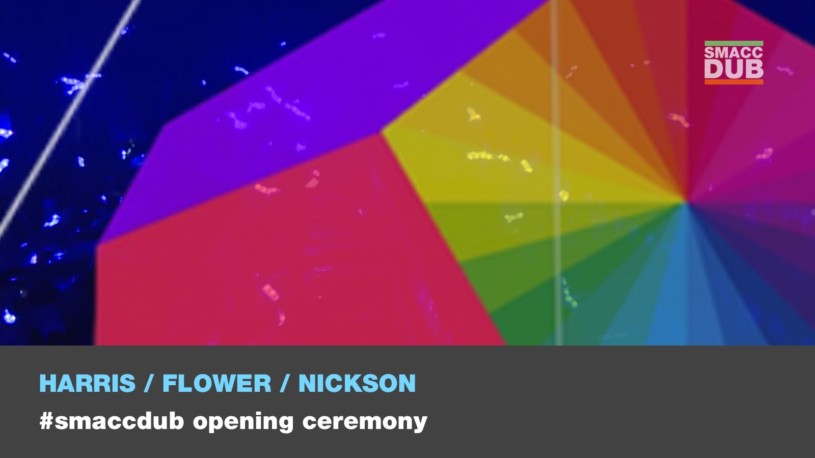 The opening ceremonies for SMACC have become anticipated events in their own right. With the hype that preceded SMACCDUB, there was pressure to deliver, and this SMACC did…
As the 2000 strong SMACCDUB crowd poured into the Dublin Convention Centre’s steeply raked and tiered arena the lights were low and a DJ set by Jamie XX played in the background. Pitch darkness enveloped the completely full auditorium and so it begins.
In the darkness, a pulsating minimal techno track starts. A giant wall of sub woofers delivers the driving bass and creates a deeply visceral experience.
A single pentagonal facet of a dodecahedron begins to flash on the centre of the stage. Lights flash around the 3D mapped form, until with a small explosion, the light and movement transfers out, illuminating the other dodecahedrons on stage. An animated nucleus then appears inside the central form; this symbolises the spark of an idea, the beginning of a thought, germinating in a mind. Innovation.
At this point monochrome transforms to colour. Five theme colours that permeate through the rest of SMACC flash up on the remaining dodecahedrons on stage. As the nucleus bounces around inside the initial object, there is interaction with the other shapes. This represents concepts being bounced around an individuals mind as well as within their close community of friends & colleagues. The initial connection.
Nuclei are evident in the other dodecahedrons. The ideas are now disseminating and being explored and developed. This transcends the initial individual or network and becomes part of a global hive of ideas, constantly evolving and honing.
A stylised FOAMed world surrounded by ideas projects digital visions of previous SMACC’s, highlighting the themes which will permeate throughout the rest of SMACC DUB: innovation, connectivity, exploration, belonging and inspiration.
So far this has potentially shown distant or removed concepts; as the music builds the crowd are made aware that this is about them. Smoke and lasers fill the room creating a surreal scenes that’s been described as Ghost Busters raving inside the Death Star.
The SMACC attendees are part of this now – this is their conference and they are the SMACC family. As a giant rig of lights comes down from the ceiling and shafts of light cut through the smoke, the music builds and culminates with a music drop and the audience’s Xyloband lights activating in time with the music. Fists pump into the air all around the amphitheatre and it’s hard to believe it 8.30 am on a Tuesday morning at a medical conference.
Roger, Oli & Chris come on stage, relieved there was no retrograde cannon backfire this year; they explain what SMACC is all about, including the philanthropic attitude, the intention of inspiring and energising and the significance of being in Dublin, where FOAM was born.
The tone is set.